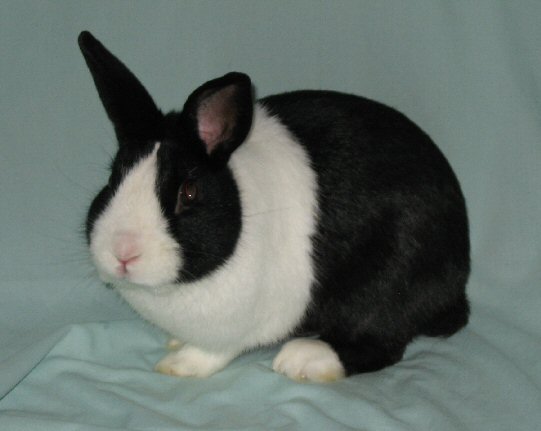 It is said that the Dutch Rabbit originated in Holland sometime around 1850 or later where it is called the Hollander Rabbit.  It found its way to England in 1864 where it has risen in continued popularity and been exported to points around the world.  The Dutch is one of the oldest breeds of domestic rabbit known, owing its existence, as do all domestic rabbits, to the much earlier domestication of the European wild rabbit, or (true rabbit).  Considered a fancy rabbit due to their distinctive Dutch markings, the Dutch Rabbit, has from its introduction, benefited from the careful attention of breeders over the years who have continue improving the breed and expanding the available varieties while maintaining and perfecting the distinctive markings.  Special attention has been paid to perfecting the general body type of the Dutch breed to the standard of perfection we know today.  Due to the high expectations demanded for perfection in type and markings, the Dutch is one of the greatest challenges for the prospective and experienced breeder alike.

The Dutch rabbit is a fairly small compact rabbit, with ears that stand erect and powerful back legs that are longer than the front legs. The Dutch rabbit is always white with the addition of another base color.  They are one of the most popular rabbits kept as pets today.  The average adult Dutch Rabbit will weigh between 4 to 5 ½ pounds and on average will live 5 to 8 years  Longer life spans can be expected if the animals are neutered or spayed.  The longest life span that has been reported is 15 years with 10 years not all that uncommon.

The Dutch is generally good-natured and quite sociable with a great personality and can be very energetic.  They do need a lot of attention and can become bored quite easily.  They are intelligent and easily trained.  Care should always be taken, as the rabbit can be a bit jumpy and wary by nature.  The body of the rabbit is very delicate.  Owners that are new to rabbits need to receive instruction on the proper way to pick up and handle their new pet, as it is very easy for the rabbit to be injured if handled carelessly.  Unlike cats and small dogs, rabbits have a natural fear of being picked up and handled and will need time and conditioning to adjust.  When young bunnies are handled carefully and they learn to trust their people early in life they will become very overt in their display of affection.  Rabbits can be trained to recognize their name and to even come when called.  They will especially enjoy sitting on its owner’s lab, snuggling, and being attentive.

Every 5 years the ARBA standards committee and board of directors publish what is called the Standards Of Perfection for each of the standard breeds recognized in the United States.  This guide provides a standardization that is used by judges and breeders alike for evaluating both Rabbits and Cavies to identify quality show animals.

In the search for perfection, probably few other rabbit breeds is the bar raised higher than it is for the Dutch.   Considered the fancy rabbit, the pursuit of near perfection in its markings is a true test of patience and perseverance on the part of the breeder.   In the case of the Dutch, it almost seems that if something can go wrong it will.  From a cheek that is too long to stops that are uneven to a slight spot on the end of the nose, all are faults and imperfections that either can be a disqualification or at least points lost at the judging table.   Don’t get me wrong, this is not a complaint. On the contrary, it is a statement about what makes raising Dutch Rabbits so challenging and interesting.  If it were easy to raise the perfect Dutch Rabbits everyone would be doing it.  And what personal satisfaction would there be in finding success at something that offers no challenge.

The American Rabbit Breeder Association, (ARBA), recognizes 7 distinctive varieties of Dutch Rabbits, Black, Blue, Chocolate, Gray, Steel, Tortoise, and chinchilla.  Other varieties exist and are popular in European countries and else where around the world where these other varieties are recognized.