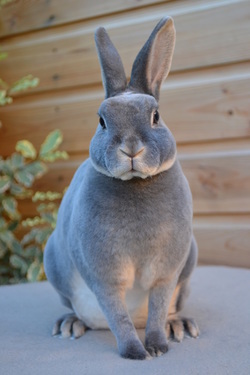 In 1986, at the annual ARBA Convention in Columbus, Ohio, Mrs. Berryhill brought forward a Castor Mini Rex for inspection by the Standards Committee for the first time. She described the long and careful scrutiny of the animal by the committee as “what seemed like a lifetime”, but the ARBA approved the rabbit, thus creating a working standard for the Mini Rex breed.   Accepted by the ARBA in 1988 as a recognized breed, these bunnies were on the fast track to becoming one of the most popular rabbits that were ever bred.  The 1989 ARBA Convention saw the first official entry of the Mini Rex and proud owners and breed developer, Monna Berryhill took home both the Best of Breed and Best of Show awards.

Compact in size, the Mini Rex has an average weight of 3.5 – 4.5 lbs, with bucks being slightly smaller than the does.  The head should be well-balanced with full cheeks and muzzle and thick, full, erect standing ears.  Well placed eyes should be round and bright.
From the shoulders down to the hindquarters, the body should have a gentle slope resembling a half sphere.  The Mini Rex should be smooth to the touch with no protruding bones or excess fat.  Short, straight legs should be medium to fine boned, and a straight tail will be proportionally balanced with the rest of the rabbit.

One of the most adorable and sweet natured rabbits of the dwarf variety, the Mini Rex Rabbit is taking the rabbit world by storm. Ranked as one of the 10 most popular rabbit breeds, the National Mini Rex Rabbit Club has deemed the Mini Rex “The People’s Choice In A Fancy Breed”.  With its soft, dense fur and charming personality, it’s no wonder the Mini Rex is such a popular choice. Adorably good looking, these bunnies have a calm, friendly, fun-loving, and curious temperament and a moderate energy level, making them a popular pet choice for families with children and those new to rabbit care.  Enjoying playful, daily interaction with their owners and easy to care for due to their small stature, the Mini Rex can be kept in the house or in an outdoor hutch.